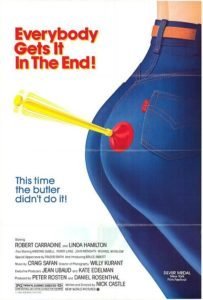 Xander Berkeley knows he’s being watched.  He runs down the corridor, being chased by a man in a hat, wearing a trench-coat.  Xander pulls out his piece.  The man with the hat stalks, with his own gun in hand.  He ducks and hides under a grate, and just when he thinks he’s free and clear, the stranger corners him.  He aims his pistol and fires.  Xander gets a dart to the head for his troubles.  This isn’t real.  This is “The Assassination Game” (or TAG for short), an admittedly fun-looking role playing game of intrigue wherein the participants (a gaggle of mature-looking college students) receive files (called “victim profiles) on their prospective targets: fellow students they must “assassinate” in order to advance and win the game.

After an obvious (and brilliant) James Bond-esque opening credit sequence, Linda Hamilton (looking hot) accidentally stumbles into student journalist Robert Carradine’s room during a particularly tense mission.  He aids and facilitates her escape, causing two opponents to eliminate themselves.  Carradine, intrigued by the game (and Linda, who can blame him?) digs up information.  He finds her name in the list of active players.  The game is always being played and appears to be causing a commotion on the campus.  The participants, humorously, are always on edge for fear they’ll be tagged.  Unfortunately one of the participants goes too far when he is tagged (in accidental fashion) and goes around the bend completely. You can tell from his rather intense, deep and dark demeanor.

The film takes on a dark tone with a murderer roaming the campus, searching for his next victims, all while playing the game, only instead of darts, he uses bullets!  Under the guise of writing an article about the game, Carradine wrangles his way into spending time with Linda, watching her as she plays.  Their courtship is cute.  Meanwhile Gersh (the aforementioned psycho played by Bruce Abbott) stares through windows, looking intense and crazy.  It’s hard not to see his breakdown occurring right in front of our eyes.  A five-time champion of TAG, he has no problem confusing reality with fantasy.  As life goes on with the game and on the campus, Gersh sizes up his next target, and reports of missing students are circulating.  Unusual that we go from a kind of comedy and misadventure, to a kind of horror movie, with the killer and his victims all lined up, with an accompanying musical score. Director Nick Castle (working from his own script) shoots the movie very much like a murder mystery, but with unusual (for this genre) touches of wit and interesting characters.  Castle is best remembered (apart from his distinguished film-making career) as “The Shape”, or Michael Meyers from John Carpenter’s first Halloween movie, as well as co-writer of Carpenter’s Escape from New York.  While the tone of the movie shifts uncomfortably from comedy to romance to horror and then back to romance, there are shades of the kind of dark, sleek exploitation film-making that Carpenter was famous for, and Castle pays appropriate homage to that kind of storytelling, particularly film noir and Hitchcock (though I doubt Hitchcock would play so fast and loose with the dark comedy, such as when Carradine unwittingly gives the killer information about his next target).  In the end, it all comes down to Hamilton and Abbott.

I love this idea.  Psychologically, the killer believes he is still playing a harmless game, and until Hamilton and Carradine finally figure it out, they were led to believe Gersh was harmless, which makes for some incredibly suspenseful scenes.  Castle is adept, working makeup and lighting effects on Abbott’s twisted features (notably his vulnerable-seeming eyes).  The movie reminds me very much of another under-appreciated film I covered: Somebody Killed Her Husband, in which normal people are caught up in something bigger and more dangerous than they initially realized.  The influence of Hitchcock comes full circle.  I’m reminded of the latest fad out there: something called Pokemon Go, in which users, guided by their cell phones, track and collect prizes, capture Pokemon, or whatever, and generally make life difficult for anyone not interested in the game, but it is intriguing in the amount of enthusiasm role-playing games like this can generate.