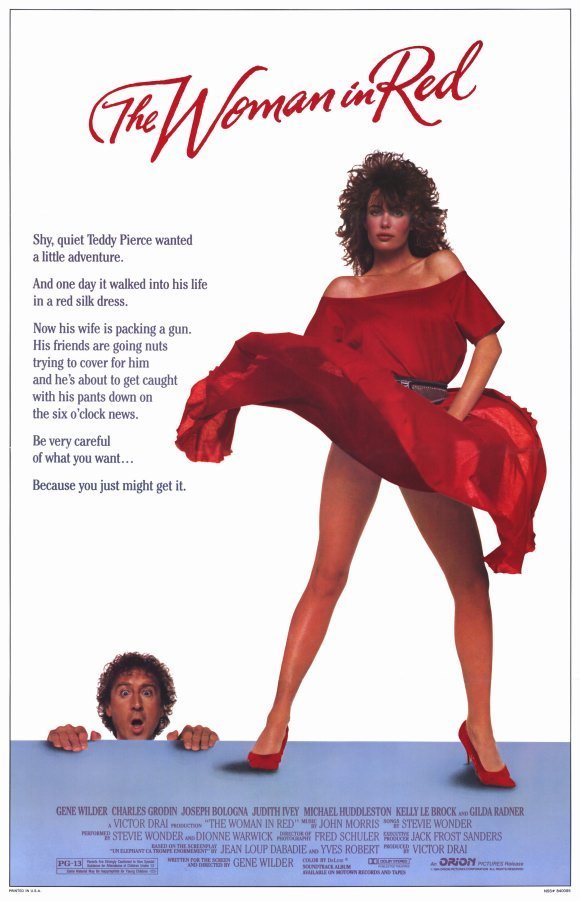 I had not planned to cover The Woman in Red until next year, but Gene Wilder’s passing prompted me to look at the movie again. As far as I know, the movie did not premiere on HBO until 1986 when we had already moved back to Philadelphia. We missed our HBO so much we bought a satellite dish (at a cost of $30 a month), and installed it on our rooftop (at a time when Philly did not have cable television below the Broad Street line). What I most remember about the movie was the heavy promotion it received during it’s initial release. The publicity and the advertisements thoroughly peddled Kelly Le Brock and the memorable (if tedious) music of Stevie Wonder.

San Francisco advertising executive Gene Wilder is negotiating a hi-rise ledge and wondering what he had done to find himself in this position.  He recalls that one day four weeks ago, he was sitting in his car in a parking lot when he spotted a woman in a red dress walking down the street.  She passes over a grate, which blows hot air up her dress, revealing her matching red panties.  She turns back, stands over the grate and starts dancing.  From then on, Gene is smitten.  He is immediately infatuated with her, and tries to set up a date with her, but mistakenly reaches co-worker Gilda Radner instead.  He seems happy yet unsatisfied in his marriage to Judith Ivey, recalling Tommy Noonan’s roving eye and boredom in The Seven Year Itch with Marilyn Monroe.

His friends are of no help to his burgeoning infidelity and thoughts of desertion.  They ogle women constantly and screw around behind their busy wives’ backs.  Joseph Bologna (fresh from Blame It on Rio) is a cad, and Charles Grodin plays a character he knows best: well-meaning and mild-mannered, but with a touch of hysteria.  All is not well as Bologna is informed his wife is divorcing him, so the central fear of loneliness is a preoccupation in Wilder’s character.  Evidently, men are all big talk until the shit hits the fan.  Interestingly, because Wilder refuses to discuss his feelings of ennui with his wife, he comes across as a gibbering idiot on the verge of a nervous breakdown.

Ivey, livid over Bologna’s impending divorce, and all the terrible stories that accompany it, informs Wilder she is a violently jealous woman.  Her revelation horrifies Wilder.  Meanwhile, Gilda awaits her “date” with the clueless Wilder, who never arrives because he had no idea he was making a date with her.  In an unusual montage, we see Gilda sitting alone in an empty restaurant, Bologna sleeping and drinking alone next to pictures of his children, and Wilder unable to sleep next to his wife in the bed they share.  The next day, a furious Gilda keys his car and breaks his antenna.  When he discovers his mystery woman had a love of horseback riding, he arranges a meet-cute with the girl at the stables.

The two hit it off, and once Le Brock shows even the mildest of interest in Wilder, his life turns around.  He is happy and confident.  He buys new clothes, and tries to give himself a new hairstyle, to which his friend hilariously compares him to Robert Redford.  As with Dudley Moore and Bo Derek in 10, Wilder manages to get Le Brock into bed, but before he can consummate his lust, her husband arrives home early, and he must escape, by climbing out on the aforementioned ledge.  Where Moore was turned off by Derek’s casual attitude regarding sex, Wilder’s screenplay and direction emphasize the loneliness of his character.  He photographs Le Brock as though she were a goddess just out of his reach. 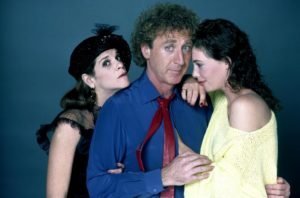 With a charmingly dated appeal, this is a movie made for the PG-13 rating.  While PG-rated movies in the late 70s/early 80s treaded lightly when it came to certain kinds of violence and off-color language, the introduction of the PG-13 rating promised movies with adult humor and themes that could be watched and enjoyed by kids.  This was the promise, but it was not kept.  PG-13 movies were produced (starting in the early 90s) to guarantee as many asses in the seats as PG movies did twenty years before.  The Woman in Red is a rare example of a movie that would be rated R (restricted audiences) if released today.

Gene Wilder never set out to become a comedic actor.  It was only when collaborators such as Mel Brooks and Woody Allen discovered his gift for controlled mania, and an unerring capacity to stretch the imagined boundaries of sanity with every character he played, were we truly witness to the birth of that comedic legend.  His first film was 1967’s Bonnie and Clyde.  Brooks cast him as the neurotic accountant Leopold Bloom in The Producers.  He would appear in Start the Revolution Without Me and Willy Wonka & the Chocolate Factory, but it wasn’t until 1972’s Everything You Always Wanted to Know About Sex* (*But Were Afraid to Ask) that he began to make a name for himself as the reluctant comedian.  He would make Young Frankenstein and Blazing Saddles for Mel Brooks, as well as a series of successful comedies with Richard Pryor.  In addition to The Woman in Red, he would write and direct The Adventures of Sherlock Holmes’ Smarter Brother, The World’s Greatest Lover, and Haunted Honeymoon.

A very special thank you to Christopher Hasler for suggesting this title.